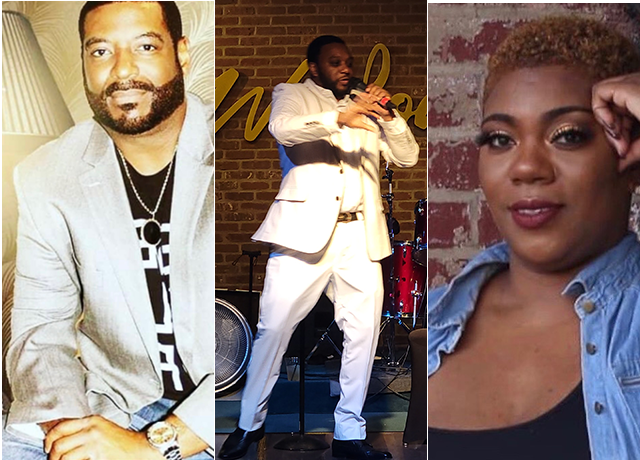 Our host for the night is Malcolm Hill. As a hot, young comic, exploring the Philly comedy scene, late nights in smoke-filled spaces like the Laff House, Punchline, Helium, and Warm Daddy’s, Malcolm killed sets on par with some of today’s greats. From disrupting classrooms at West Philly’s Overbrook H.S. with Will Smith, to going back to back with future greats, Kevin Hart and Michael “muddasucka” Blackson, Malcolm perfected his craft as a comic’s comic and a true journeyman in the game. Back then, most thought he would go to Hollywood before Hart or Blackson.

They often say that you can tell a lot about a person from their name. In this case, comedian TALENT embodies the definition with full force. His natural ability to bring laughter into many households and venues has given him the opportunity to headline his own comedy shows and tours as well as make special appearances on such reputable programming, like BET’s Comic View, HBO’s Snaps & Def Comedy Jam. The well earned position as host of New York’s 98.7 KISS FM’s Morning Show propelled his career which opened up greater opportunities for the future. TALENT’s capacity for achievement and success is an ever evolving journey.

His exceptional blend of off-the-cuff humor and instinctive timely delivery has catapulted him to the top of an impressive list of “acclaimed” comedians. Deemed the official “King of New York Comedy,” TALENT continues to headline at the prestigious venues as Caroline’s on Broadway, Showtime at the Apollo, and BET’s Comic View. The unorthodox comedian is most known for reminding fans that…”it’s just comedy!”. Comedian TALENT continues to bring audiences to their knees with his hilarious improv and his inimitable gift for storytelling.

TALENT has been cast alongside such celebrated actors as, Danny Devito, Marisa Tomei, Rosie Perez,John Leguizamo, and Michael Rappaport and more. His growing theatrical resume includes appearances in movies, “Sunset Park”, “Full Court Press” and “A Brother’s Kiss”, and on various music albums including multi-platinum selling projects (The Fugees “The Score” & Wyclef Jean’s “The Carnival”). TALENT has also loaned his voice to national commercials and spots for other celebrities including producer-rap superstar Missy Elliott. The multi-dimensional TALENT has also exercised some of his other exceptional abilities including a brief stint as a contributing writer for one of the largest urban/hip hop magazines in the world. TALENT’s column, “Joker’s Wild” appeared in The Source Magazine, where he interviewed famed comedians from around the world.

Now with a loyal audience and a nation-wide buzz, comedian TALENT has released one of the most anticipated comedic albums appropriately titled, “It’s Just Comedy.” The album includes hilarious comedic performances by TALENT and also features guest comedians and popular music artists.

TALENT has put a trademark on finding a way to make the world find humor in life throughout its up and down by continually reminding us not take all this too serious, because…”IT’S JUST COMEDY!” As they say, laughter is the best medicine and humor lightens your burdens, inspires hopes, connects you to others, and keeps you grounded while keeping in mind…”IT’S JUST COMEDY!”

TALENT currently resides in New York City and continues to travel the country spreading laughter throughout.

Comedian Monique Latise born & raised in Paterson NJ. Since childhood Monique had dreams of becoming an entertainer. In 2010 Monique stepped out on faith, aggressively going after a career in comedy. Today Monique Latise is a well sought after comedian. She is the winners of Young Guns Of Comedy 2011, Comics Rock Clean Showcase in LA 2018, 3rd place winner at The Apollo theater 2018. Monique Latise is a COMEDY POWERHOUSE with a very nice resume. She has blessed major comedy clubs such as, The Broadway comedy club NY, New York Comedy Club, The Governor’s Comedy Club NY, Caroline on Broadway, Stress factory Comedy Club NJ, The JSpot In LA, The Laugh Factory in LA, Downtown Comedy Club in LA. Monique Latise also host and produces several comedy shows throughout the tri state area. Monique is the founder of a youth mentor program and showcase called YOUNG STARZ ROCK. She has accomplished 3 self promoted and sold out “ONE WOMAN SHOWS”…And currently promoting her “PRISON MOM”‘TOUR 2019!