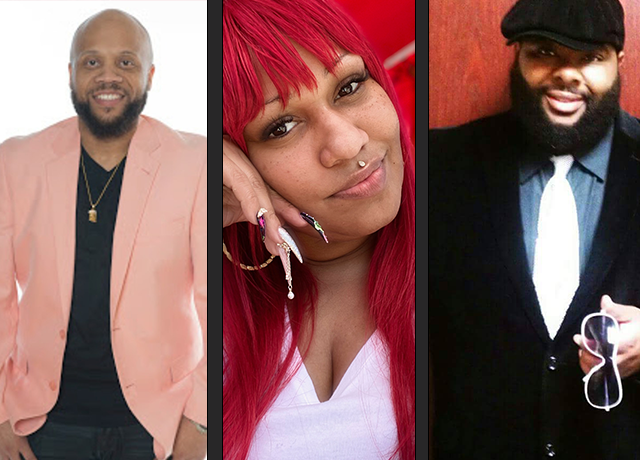 Our host for tonight is ToppFlight.

Comedian ToppFliight born Tirese Rhone has a natural-born ability to take his audience to higher heights when it comes to laughter. ToppFlight was born and raised in the city of “Brotherly Love”, Philadelphia, PA. Although his upbringing was tough, he always was able to find joy in bringing the gift of laughter to others. He began his professional career as a comic in 2012 performing in the Tri-State, before winning the Philadelphia “Comic of the Year” in 2013. He’s since performed at The Helium Comedy Club, The Laugh House, Planet Hollywood Las Vegas, Liacourus Center and The Punchline in Philadelphia. ToppFliight is spreading his wings by flying across the country and performing at the Improvs in Houston, New Orleans and for audiences in many other cities across the United States. Comedian ToppFliight has opened for top comedians such as Michael Colyar and Tommy Davidson as well as NeoSoul duo, Kindred Family Soul. He has also made an impressionable appearance when he performed for Bob Sumner’s “The Laugh Mobb” at the world renown Apollo Theatre in New York City. ToppFliight has one bigger passion outside of comedy and that is his fight for Autism Awareness. This single father of one daughter and two boys (one with autism), is an advocate for Autism Awareness. He consistently has dedicated his time and efforts to shine more light on this mental condition. He ignites awareness through his comedy and his advocacy work. For ToppFliight, family and comedy are everything. They derive from a place of love and high hopes; a place where he can take to the skies and make it to the top. The gift to make people feel the joy of laughter, is priceless. His dream is to be all that he can be for his children and the world. ToppFliight has found that balance with comedy. You can check ToppFliight out at the nearest comedy club near you or on his social media.

Stiletto
Hailing from the Mecca of Comedy in the DMV, the Dynamic Comedian Stiletto is guaranteed to deliver some of the most side-splitting truth based comedy on this side of the globe. She has brought down the house everywhere from the World- Famous Apollo Theatre in Harlem all the way down to the Dirty South at Atlanta Uptown Comedy, Grace the West Coast at Tommy Ts and Tempe Improv and many more. This Lady has left audiences dying for more and begging for encores! Yes Indeed, Stiletto will always bring the HOUSE DOWN…. She’s not Right, but she’s Ain’t WRONG!

Nate the Landlord
(Nate The Landlord) is a Philadelphia Pa born and raised Standup Comedian/Writer/Actor/Host, that honed his skill on the Philadelphia comedy circuit through open mic. The Legendary Laff House Comedy Club open mic was one on his main stay. Nate is a highly energetic an animated stand up comics. He  prides hiself  on having just as much fun as his audience so it’s always a party when Nate is on stage. His professionalism is match by none capable of doing Uncensored, Clean & his favorite Gospel Comedy.He is one comic that pay intention to detail and can handle any job or spot that is needed from Host to Headline. Nate has been seen on Comcast Cable On Demand,The Movie Family Affair & The Play Witness. He’s also opened up for or performed with, Bill Bellamy, Tommy Davidson, Guy Torry, AJ Johnson, TK Kirkland, Nephew Tommy, just to name a few. Nate will be coming to a stage near you and remember “He Will Get His Rent”