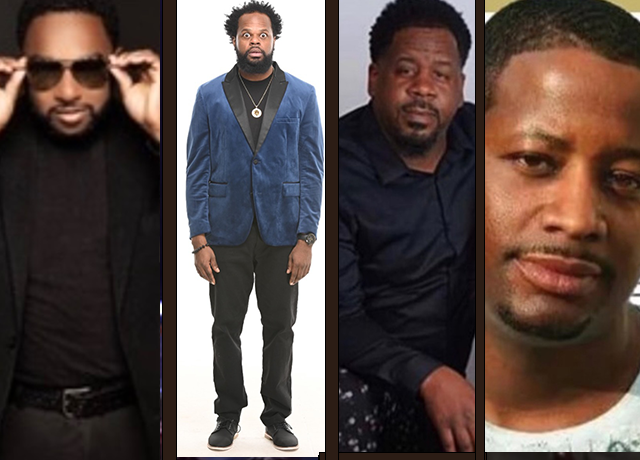 Our host for the night is Malcolm Hill. As a hot, young comic, exploring the Philly comedy scene, late nights in smoke-filled spaces like the Laff House, Punchline, Helium, and Warm Daddy’s, Malcolm killed sets on par with some of today’s greats. From disrupting classrooms at West Philly’s Overbrook H.S. with Will Smith, to going back to back with future greats, Kevin Hart and Michael “muddasucka” Blackson, Malcolm perfected his craft as a comic’s comic and a true journeyman in the game. Back then, most thought he would go to Hollywood before Hart or Blackson.

They often say that you can tell a lot about a person from their name. In this case, comedian TALENT embodies the definition with full force. His natural ability to bring laughter into many households and venues has given him the opportunity to headline his own comedy shows and tours as well as make special appearances on such reputable programming, like BET’s Comic View, HBO’s Snaps & Def Comedy Jam. The well earned position as host of New York’s 98.7 KISS FM’s Morning Show propelled his career which opened up greater opportunities for the future. TALENT’s capacity for achievement and success is an ever evolving journey.

His exceptional blend of off-the-cuff humor and instinctive timely delivery has catapulted him to the top of an impressive list of “acclaimed” comedians. Deemed the official “King of New York Comedy,” TALENT continues to headline at the prestigious venues as Caroline’s on Broadway, Showtime at the Apollo, and BET’s Comic View. The unorthodox comedian is most known for reminding fans that…”it’s just comedy!”. Comedian TALENT continues to bring audiences to their knees with his hilarious improv and his inimitable gift for storytelling.

Lamar Todd is next up on this incredible comedy night of superstars! Lamarr was born and raised in Chester, PA and started acting at the early age of 12 at The People’s Light & Theater Company. He has performed in several mainstage plays for theaters along the East Coast. Lamarr is well known East Coast standup comic. He started his comedy career at the Laffhouse Comedy Club in Philadelphia, PA, which led to various performances at comedy clubs & casinos nationwide. In addition to winning numerous standup comedy competitions in the Tri-State area, Lamarr has graced the stage along with Kevin Hart, Nick Cannon, Michael Colyar, Monique and other nationally known headlining acts. He has also starred in the Movie “Kony Montana” with comic Michael Blackson. He was recently featured on The Q Show on FOX. Lamarr also teaches Standup Comedy at Philly Improv Theater for Kids & Teens and also at local public schools in PA. Expect to see Lamarr venting about all of this, on a stage near you!

Funny Mike has been seen on Comic’s Rock and BET Comic View.

Our headliner for the night is Timmy Hall. Timmy Hall is a stand up comedian whose distinct experiences as a police officer, husband and father, creates a realistic comedic image of life that makes him stand out above the rest.. He has been featured on HBO, BET and performs comedy at comedy clubs such as (Improv, Laugh Factory), corporate affairs, and arenas.