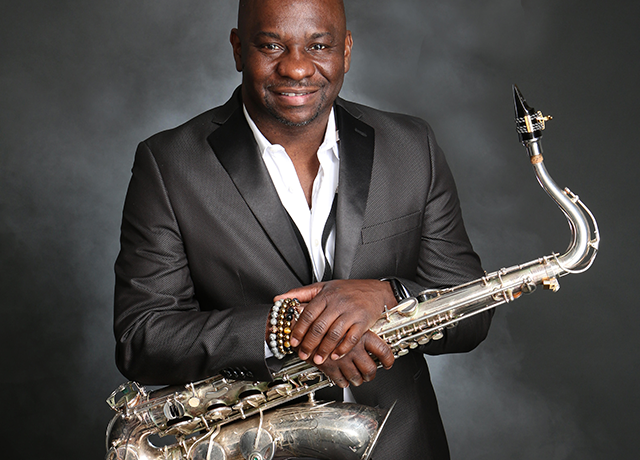 New Jersey native James E. White is a skilled saxophonist who has traveled
internationally, captivating crowds and mesmerizing audiences. A prolific and inspirational
artist, James White has maintained the reputation of a versatile musician and a passionate
performer. James plays the soprano, alto and tenor saxophones and possesses over thirty
years of experience as a Jazz, Blues, Classical, Gospel and R&B musician.
At the impressionable age of seventeen, James White received a young artist recognition
award from the former Governor of the State of New Jersey Thomas Kean, which helped to
inspire his passion for the woodwinds and his true love of the arts. Highlights of his career
include performances at Ashford & Simpson’s Sugar Bar in New York, NY, Showtime at the
Apollo in New York, NY, the Viva Las Vegas Festival in Las Vegas, NV, the Pomeroy Jazz
and Blues Festival in Pomeroy, OH and performing with jazz artists Jimmy Scott and Leo
Johnson. James has recorded and performed with various gospel artists, including Alvin
Slaughter. He performs regularly with the Dimensions Band Featuring Valarie Adams and
The Gas House Gorillas. In addition to performing with the aforementioned bands, he
performs with The Brothers 2+2 and the Plex Entertainment.
If music is the ultimate love language, The James White Band is the consummate
conversationalist. Mr. White formed The James White Band in the furtherance of his
passion for music. From live gigs to studio sessions, this ensemble captures broad
audiences around the world with their distinctive and undeniable musical style. Most
notably, The James White Band has been the opening artist for the Hub City Jazz Festival
in New Brunswick, NJ for the past ten years.
In addition to performing in various venues abroad, James is a gifted minister of music who
directs and performs regularly at churches throughout the New York Metropolitan area.
“Closer than a Brother”, Mr. White’s debut CD, is played worldwide on Sirius/XM radio and
on various domestic and international stations.
His soulful and captivating sound will inspire every listening ear to be moved by the power
of music. James’ tantalizing style and stage presence commands attention. This multi
talented and gifted artist instantly connects with every audience.