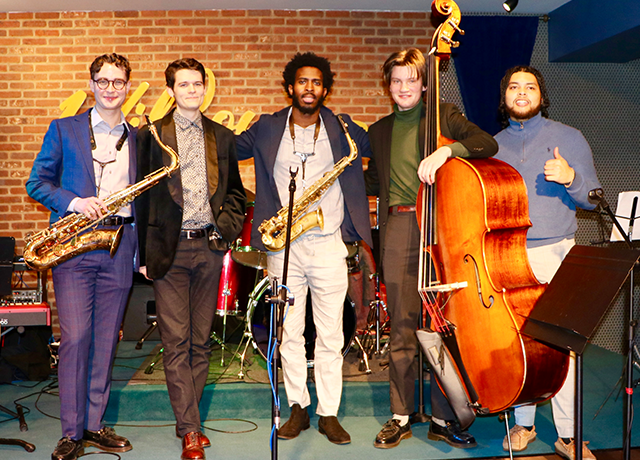 Patrick Hill is an American Alto Saxophonist, Woodwind Instrumentalist, Educator, and Composer. As a native of Dallas, Texas, he grew up under the mentorship of critically acclaimed Alto Saxophonist, Brad Leali. Being immersed in the Dallas scene since high school and sharing the stage with various jazz masters has inspired Hill to be a dynamic, successful, and dedicated Jazz Saxophonist. Hill has a passion for high quality and results-focused mentoring, this includes an exceptional resumé as an educator. In addition to teaching his own private studio, he has taught and given clinics at festivals such as the Cleveland Tri-C jazz Festival and the Temple University Duke Ellington Jazz Festival.

Patrick completed his Undergraduate studies at the University of North Texas with a Bachelors in Jazz Performance where he studied under Brad Leali. While studying at UNT, Patrick had the opportunity to perform in various ensembles including the Grammy Nominated I O’Clock Lab Band under direction of Alan Baylock, the UNT Latin Jazz Ensemble under direction of Jose Aponté, and the 3 O’Clock Lab Band under direction of Tanya Darby. While living in Texas, he also had the pleasure of performing as a sideman and bandleader with several revered musicians including  Shelley Caroll, Brad Leali, Conrad Herwig, Wycliffe Gordon, Kenny Werner, Ari Hoenig, Quincy Davis, and Kirk Whalum.

He recently completed his Masters Degree in Jazz Performance at Temple University in Philadelphia, Pennsylvania under the mentorship of members of the Vanguard Jazz Orchestra, Dick Oatts and Terrell Stafford as well as Tim Warfield Jr. While living in Philadelphia, Hill has had many opportunities to share the stage and record with a variety of artists like Dick Oatts, Tim Warfield, Terrell Stafford, Marshall Gilkes, The Vanguard Jazz Orchestra, The Philly Pops Big Band, Christian Mcbride, Joey Defrancesco, and Mike Boone to name only a few. While in his first year at Temple, also competing and placing as one of the top 5 saxophonists in the North American Saxophone Alliance (NASA) Jazz finals. He then further used his talents to place as lead Alto Saxophone in the 2020 JAS Aspen Snowmass workshop and festival where he studied under Christian McBride, Shelley Berg, and Chuck Bergeon. To end his time spent at Temple, he was awarded winner of the 2020 Downbeat Student awards for “Best Graduate Arrangement” for his arrangement of “My Shining Hour”.

Hill’s goal is to present a unique sound to the general and musical public that pays homage to the previous innovators of this music while moving forward his own perception of melody, soul, and swing to bring forth a sense of community.