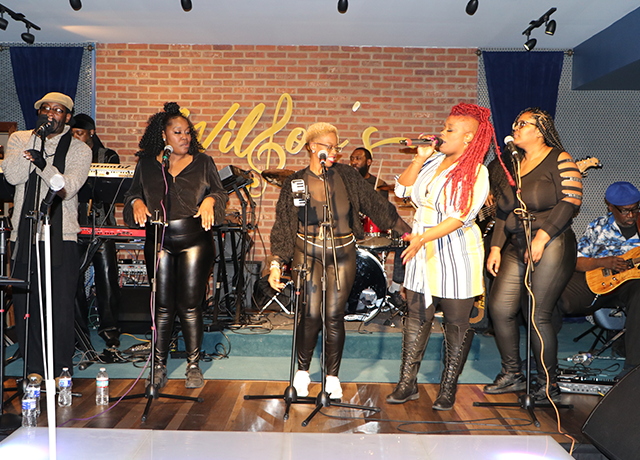 As a child, Lovey experienced her family traveling; ministering at different churches and events. She watched her grandfather slay audiences and even women with his smooth vocals and unique dance moves although singing gospel! The people’s reaction to him is what made Lovey decide “THIS IS WHAT I WANT TO DO!”

All through school, beginning in Elementary school, Lovey let it be known that she not only could sing but had an insatiable desire to sing! She sang in choruses, All State Choirs, Community Choirs, RnB groups.. She was always excited to learn and become even more skilled in her love for music.

Being a Pastor’s daughter, granddaughter; She undoubtedly sang in church. In 1999, she met Willie”SKOOB” Hines of the iconic hip hop duo DAS EFX and her life changed. “Skoob” challenged Lovey in other areas that Lovey had only toyed with but never pursued, Songwriting.
He challenged her to a freestyle. He played a track and told her to make up a song to it on the spot, off the top of her head!!! She thought it was impossible but she closed her eyes, opened her mouth and it began, “Who told you…” And Skoob was all in! They began a relationship that brought the writer out of Lovey and she became a writing machine and in 2000 Skoob helped Lovey sell her first song! She went on to sell another the following year and continued to write.

Life and circumstance took a turn and Lovey moved away and her and Skoob lost contact for almost ten years. In those ten years, Lovey didn’t do much singing and had a terrible case of writer’s block. She lost faith in herself and chalked it up to not being what she was meant to do.

In 2014, while living in Colorado Springs, Lovey met a young man who heard her singing in the store. He told her about a showcase and gave her a flyer. Unfortunately, the showcase was for singers with original music and Lovey’s originals were in her past, with Skoob.

The promoter, LEGIT PLAYER JEFF C. told her to come anyway because his mother’s name was Lovey;she had recently passed and he had a good feeling. So Lovey attended with no intention to sing but when Legit met her he had to hear her sing. Lovey sang a few lines and the showcase was called to a close, Lovey began working with Legit.

Lovey wrote her first song in nine years and continued to write more as she transitioned from Colorado to Philadelphia. The second-year Lovey was in Philly she met a gentleman named Geren who had heard she could sing and told her about a band that was auditioning for singers. He took Lovey to the audition. The band was only looking for two females and there were three auditioning, including Lovey.

The band, Full Circle, then asked Lovey to sing a song she had never sung before; ANGEL by Anita Baker…
Full Circle had 3 female leads!

Lovey began to get a better feel for the stage and performance performing with quite a few different cover bands in Philadelphia including her own VILLAGE SOUND BAND in Connecticut.
Finally, she found a home and steady work with the COAST TO COAST BAND of Philadelphia with whom she still travels and performs as their female lead.

Lovey has since had her hand in songwriting again, vocal production and arrangements, commercials, tributes, open mics, and so much more!

Music is truly Lovey’s joy and lifeline and loves nothing more than to share that joy with everyone and anyone who will listen!!