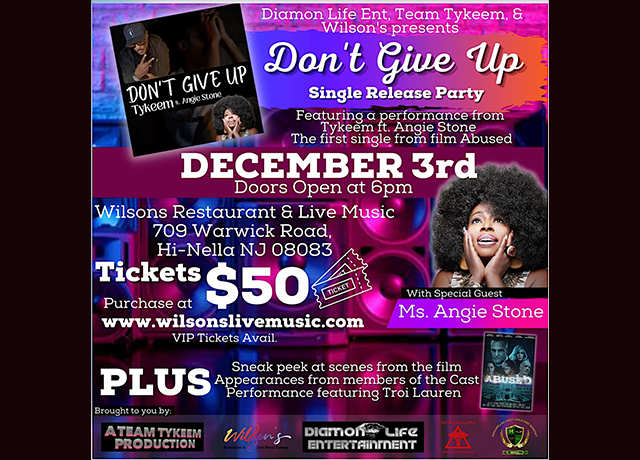 Join producer, director, and singer Terrance Tykeem at the release party for the first song from his star-studded film “Abused.” Don’t Give Up is a very inspiring song and features Grammy winner, Miss Angie Stone.

Angie will be joining Tykeem for a live performance. Tykeem will perform the song from his film touched with Miss Troi Lauren. There will be several sneak peeks of the film “Abused” throughout the evening. There will be a Q&A session with Tykeem, Angie, and other cast members.

VIP TICKETS
Meet & Greet with Angie Stone and other celebrities where you can take photos. Win a speaking role in Tykeem Terrance’s next movie project.

The multitalented and socially conscious, Terrance Tykeem is an Author, Film plus TV show producer and director plus a Recording Artist. Many may remember him from his late 90’s hit single, “If You Can’t Learn to Love Her”, which dealt with the issue of spousal abuse and received national attention on TV and Radio. Shortly after an on the field injury deterred him from pursuing his lifelong dream of playing in the NFL, Terrance quickly turned his disappointments into a new business venture and started Top Flight Records, where he learned the ins and outs of the
music industry, signed a number of groups, and financed and promoted concerts with some of the top acts in the music business.

Throughout his music tenure, Terrance has landed several recording deals with major distributors and labels such as Indie, 125th street records where he was singed by legendary hip hop artist Eric B, and Brandon Records which was distributed by Warner Bros. Outside of his own musical endeavor’s, Terrance assisted in the signings of NAAM BRIGADE to Electra Records and R&B Group UNPLUGGED to Cash Money Records. Terrance also participated in the Cash Money/Ruff Ryder tours and the Paid in Full tour. He has produced several TV shows, which gained the interest
of BET, VH1 and others. His first TV show called “The Players Club”, whose name was sold to rapper/director Ice Cube for his first feature film of the same name has given him the confidence to go further in the film & Television field.

In 2002, Terrance began his career as an author with his first published book entitled “More Than One Flavor” followed by “Guilty by Reason of Arrest” in 2013. The success of his follow up book entitled “Touched” he was able to gain national notoriety which inspired him to produce his first film also titled “Touched”. This film is a companion project to the book and is designed to educate the public and shed light to the pandemic of child abuse here and around the world, though not releasing Touched he screened it in 22-cities. He followed that up with his film “Jason’s Letter” about a young boys need to find a solution to the police shootings in his community, after starting on the Starz Network it has since aired on most digital outlets, Amazon, Hulu & will air on the
Showtime Network later in the summer of 2022. As that film continues to air he has since released the film When George Got Murdered, which takes a unique look at the killing of George Floyd and the affects his death has had on America & beyond. Terrance currently has several other completed projects, namely two reality shows,Confronted & Behind the Mix for which he is in talks with several TV networks. A TV ad he developed for Doritos is now being revamped for the Tostitos brand. Lastly, his next film entitled “Abused” is nearly completed and is in post-production and will be ready for a winter 2023 release.