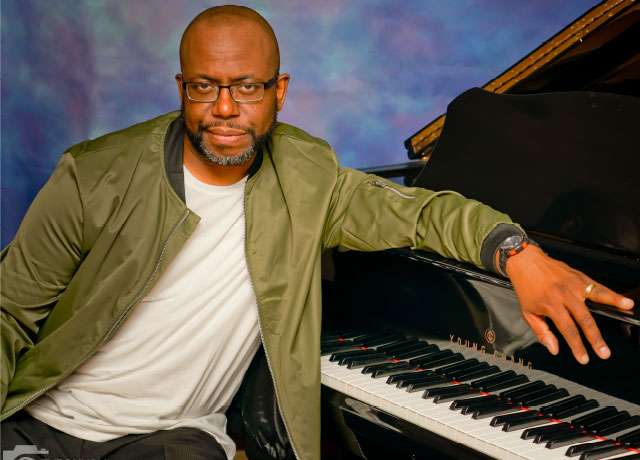 A South Philadelphia native, you could say music is in Dexter’s genes. Like many talented musicians,
Dexter’s initial exposure began in the church. A product of both ministers and musicians, his dad (a
deacon) is a keyboardist/organist, his two brothers are drummers, and his sister sings actively in church.
His late mother (an evangelist) also played both the piano and the drums in church. Through his
associations with other talented musicians in Philly, Dexter was introduced to Grammy-nominated artist
and songwriter the late Rev. Gabriel Hardeman Jr. at a jam session in Camden in 1987, and this would
profoundly change his music career forever. As fate would have it, Dexter became a full-fledged
member of the Gabriel Hardeman Delegation almost 5 years after that chance encounter and is featured
prominently as the main keyboardist on their last CD recording entitled The Chief Musician (2001). In
1995, Dexter, along with other GHD band members, joined forces to become D-For, showcasing an
eclectic array of styles in the jazz lexicon, including straight ahead jazz, smooth jazz and fusion jazz, but
not too far out to encompass a little gospel, funk, and blues in the mix. D-For recorded and released 3
albums: The Gift (2000), Intersection (2005) and Christmas From the Heart (2020). In 2016, Dexter
began to commercially release new music through his own company Right Side Music Productions LLC,
and in 2017 Dexter released his debut jazz album Keys to Life, a 10-song LP featuring musicians and
artists mainly from the Philadelphia area. Dexter released his 2nd jazz album Good Vibes, Always in
2021 with help from some of the very best players in the music industry. To promote this release,
Dexter issued a single “Good Vibes” for radio promotion and has been played on Billboard Smooth Jazz
radios across the United States and abroad. Dexter is set to release another jazz single titled
“Appreciate” (featuring Jeff Murrell) in February 2022 on all major digital platforms. Dexter is blissfully
married to his wife of 23 years and both are the proud parents of 2 teenagers. Dexter would like
everyone to know that he is, first and foremost, a family man, enjoys puzzles and is a huge Philadelphia
Eagles fan. Dexter also serves as minister of music at his church.