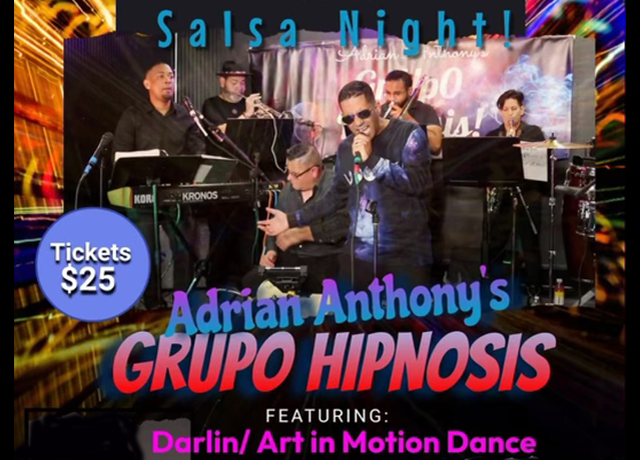 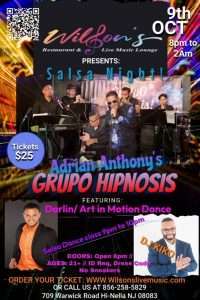 Adrian Anthony is singer/Musician/Musical Director/ arranger and producer he comes to you with an extremely diverse background with many years of playing in a variety of bands spanning from Puerto Rico to United States. He’s had the honor of performing alongside and open for numerous famous Latin musicians, for example Elvis Crespo, Tobby Love, Henry “Pucho” Brown, the late Tito Puente, Johnny Pacheco, and among many others. His experience and influences have given him the ability to entertain in a variety of Latin Rhythms and styles. His band comes together collaborating from areas of Pennsylvania, New york and New Jersey, providing you with the Hipnotic sounds of Merengue, Salsa, bachata, reggaeton, cumbia, boleros, and top 40 English tunes with a Latin twist. He performs with his full band and quartet set-ups through the states. Just Remember his teams of talented musicians come together for one goal to make you Dance the night away!!!!

Adrian Anthony has also had the privilege to perform on national TV and is currently in the mist of recording a project with his band. The Album Titled Adrian Anthony’s Grupo Hipnosis “DANDOTE LA DOSIS!” will feature a mix of Bachata, Salsa and Merengue and reggaeton. The album will feature numerous collaborations with great Musicians Like trumpet player Matt Cappy who has Recording credits with Michael Jackson, Jill Scott and much more.

Adrian Anthony has recording credits and collaborated in a song named “Julian” with the great Erben Perez (Marc Anthony’s) bass player of over 25 years. He has also worked with Jennifer Lopez, and has recording credits with the best in the Latin industry. The song titled “Julian” is based on a true story of hope and faith. It’s based on the medical condition Trisomy 18, and believing that that the man above will carry us through the toughest times in life. The song will also debut under the organization SOFT dedicated on helping families with children with the medical condition. You can find more information/support services for Trisomy 18 through (Trisomy.org).

Adrian Anthony’s Grupo Hipnosis has four single releases through iTunes and other social media platform sites with many played live on stage including his singles “Porque Sera” (Wonder Why) and Hasta Que Te Conosi (Until I Met You). You can find his latest updates on https://www.facebook.com/GrupoHipnosis1